Like the rest of us, Dan found that it is hard to pin down Real-World- check out his closing comments…

Here are some closing words about “real world” math, mostly distilled from your comments on the last post. As with previous investigations, I am indebted to the folks who stop by this blog to comment and make me smarter.

Follow the link above to check out the full blog

As the thought of Real World kept running through my head I asked myself how I would propose the problem to my students.  The biggest question to begin with is what I wanted the students to actually discover and decided that it was the question of when the area of the circle is equal to the square, not including their construction or representation.  So this is where I would take this problem.

Every class period I can be found outside my door in the hallway, monitoring the activity between classes, this creates a “bellwork” scenario for my students where I propose an activity or problem for them to work on for the first 5-10 minutes of class, a “warm up”.  When students entered my room for this problem, they would see something similar to this….

Hit the target, get a FREE MOVIE!

That’s right students, all you have to do is put one dart in the target to win a free movie from CEC entertainment!  Here is a target for you to practice with until class starts and we officially begin the contest! 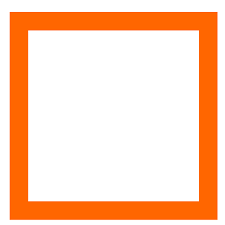 Normally local business are pretty good at giving teachers some incentives for students, and I have had my local theater give me free movie passes, a great material reward for students (other than the reward for doing mathematics).

This would start a good conversation about which target was easier, creating a great bridge into what I am wanting the students to discover.  I would let them know that we won’t start the contest until they agreed it was fair (a vignette connecting to probability and fair games).   This could go two different routes, one is the Area Model and another is Probability.  I would have some overlay graph transparencies available so students could investigate the different areas or probabilities in that manner if they wished.  Whatever method they used, I would ask them- are your chances to win with my circle target the same as with your square warm up target?  If not, how big should my circle target be?  That would supply the students with the “motive” of the lesson, and small guiding questions here and there to small groups would make sure student thinking was following the correct path.

Where does this fall in the “Real-World” math scale?  Certainly not 100% real world application unless students plan on traveling a carnival circuit.  Is it intriguing?  To some students it would be, but to most they could care less about the actual mathematics they are performing to find the answer.  Is it motivating?  For most students it will be.  They will struggle with the mathematics to solve the problem because finding the correct circle size will get them their “reward”.  It would also create a very Real World experience for them to remember if they have a similar type of problem to solve.

I would also follow up this activity later on in the school year asking students to create other geometrical figures that would give students the same chance at winning the movie as our square and circle.